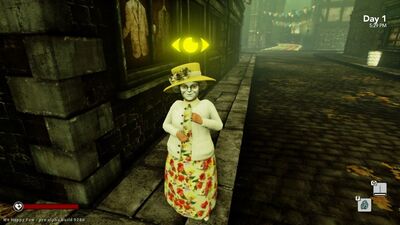 Criers are old women that can be seen roaming within Hamlyn Village. When a Crier notices the player is a Downer, they alert all nearby Bobbies and Wellies in the area by letting out a high-pitched scream. Criers are the only non-hostile character in the game and run from the player instead of engaging.

Criers are usually the most suspicious out of all the Wellies. When not on Joy, the player should make it a point to greet as many Criers as possible to keep suspicion low.

As of now, Criers will not attack the player if they are outed as a Downer. Instead, they will scream and run off to the nearest bobby or Wellie. When attacked by the player, they will still not engage in combat, just run away screaming.

As with most Wellies, items dropped by Criers are randomly generated.