We Happy Few Wiki
Register
Don't have an account?
Sign In
Advertisement
in: Candidates for deletion, Notes

View source
This page is a candidate for deletion.
Reason: "Note details are also on page Notes" 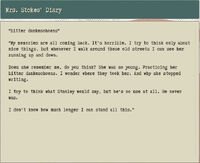 Mrs. Stokes' Diary is one of the Notes found in the game We Happy Few.

"My memories are all combing back. It's horrible. I try to think only about nice things, but whenever I walk around these old streets I can see her running up and down.

Does she remember me, do you think? She was so young. Practicing her bitter dankeschoens. I wonder where they took her. And why she stopped writing.

I try to think what Stanley would say, but he's no use at all. He never was.

I don't know how much longer I can stand all this."

"There is that hatch on Apple Holm"

"If only I could flee to the mainland. There must be some people out there, otherwise did we trade for food with all those years?

But the Bridge is in the Parade District.

I suppose there is a subway hatch Stanley was always nattering on about, on Apple Holm. Stanley said one of his mates had a boat in there. You could row to the Parade, he said.

That ridiculous man, always talking rubbish. They've been dumping poison on Apple Holm for years. The fumes would kill you in a half a minute. Why on Earth did I marry such an idiot? I miss him so."